It is the third longest river in South America. From its source near the Brazilian border in the south of the country up to its wide Delta, located on the northeast coast, the Orinoco covers about 2150 km. In the forested islands we can find the Warao Indians who live in houses built on stilts on the banks of the river, they travel by canoe and they earn their livelihood from fishing.

Among the bends of the lower Orinoco rises Ciudad Bolivar (formerly it was called Angostura), a very hot spot with a glorious history, which still retains much of its colonial charm. In this place Simon Bolivar established its base during the final phase of the war of independence, before the country was liberated from Spanish rule, the city became the capital temporarily.

Visitors who come to Ciudad Bolivar often are in the way to Canaima, an enclave situated along the river Carrao near a chain of seven magnificent waterfalls. In one of its tributaries, is located the Angel Falls, the highest waterfall in the world with an uninterrupted drop of 807 m (17 times higher than Niagara Falls.)

If you continue to the southeast, you can enter the fascinating landscape of the “Gran Sabana”, with its tepuis (flat-topped mountains) and deep abyss (with cavities in the jungle up to 350 m in diameter surrounded by steep cliffs). 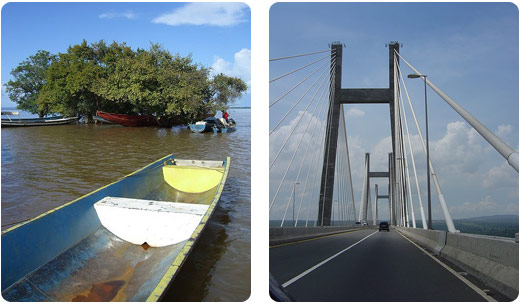