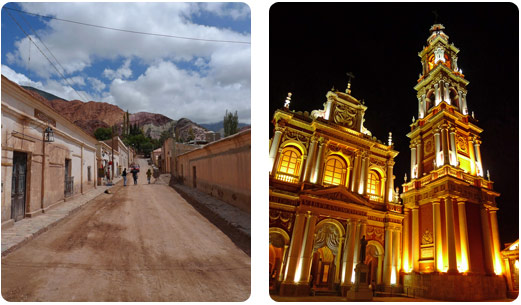 Salta the beautiful one

Salta province nicknamed Salta la Linda (Salta the beautiful one), is located in the Lerma Valley, at the foothills of the Andes Mountains in the North-West of Argentina.

This Argentine province has got the particularity of bordering on three South American countries: Bolivia, Chile and Paraguay.

This province has become one of the best tourist destinations in Argentina due to its colonial, old architecture and the natural scenery of the valleys westward.

Besides, Salta province is the most Spanish-like city in Argentina, so much so that visiting tourists from Spain very often find a strong resemblance between Salta and the Andalucian cities.

The local culture, however, is a blend of Spanish and gaucho traditions, lending the city a unique identity, in some way different from the more European-like metropolises in the south.

Salta also has got an important historical heritage and a cultural patrimony which invite to a further intense discovery of the area. The travelers will have the opportunity to get direct contact with ancestral customs that have remained alive in the town.

The weather is warm and dry; January and February are the months with greatest rainfall. So low season takes place in those months. Nevertheless visiting Salta in summer is possible, taking under consideration this important information.

The pick season in this province is during the winter: July and August. But already from April and up to October it is quite possible to enjoy all the tourist attractions offered by this beautiful destination.

Hill of Seven Colors From Purmamarca

The distances from Salta to other Argentine cities are:

From Salta, there is a variety of excursions such as:

A visit to the Museum of High Altitude Archaeology of Salta.

This museum will give you the opportunity to travel through the Inca history because it exhibits historical findings of the Incan culture and especially the archaeological treasure of the Llullaillaco Children.

Cachi is a simple pre-Hispanic town with green landscapes, adobe houses (The architecture shows noticeable influence of both the indigenous and Hispanic trends) and stone streets. It is a small town but impressively beautiful. It is surrounded by mountains of more than seven thousand meters of altitude.

Cachi invites passengers to take nice walks and visit tourist spots such as Charmed Valley, the 3 rivers Cachi, Las Arcas and Las Trancas, the archeological museum, the cemetery and the town Parish.

The Gorge of Humahuaca was declared “World Heritage Site” in the category “Cultural Landscape” by UNESCO.

It is the perfect combination of spectacular landscape and archaeological richness. It is painted with multi-colored hills and adobe houses that seem to sprout from the landscape.

Visiting today the towns like Tumbaya, Maimará, Purmamarca, Tilcará and many others is to feel like part of a millenarian history, it is to enter in a different time because the area has got more than 10.000 years of history still alive in this spectacular valley of 150 kilometers in length. In fact, the Humahuaca Gorge once served as a route for the Incas, a required passage for expedition parties and settlers, and an important commercial route in the vice regal period.

Also during the excursion you will visit the Pucará de Tilcará and its Archaeological Museum, the typical church of Uquí­a and the Hill of the Seven Colors in Purmamarca.

At Humahuaca town you will see the Independence Monument and the famous Church.

When passengers return to Salta always stop in San Salvador de Jujuy for a sightseeing of its historical monuments.

This full day excursion will stay in your memory forever and also will make you live one of the most impressive experiences of your life.

Train to the Clouds:

The Train to the Clouds (Tren a las nubes) is a train service that connects the border with Chile with the Argentine Northwest right in the Andes mountain range. The train goes over 4,200 mts (13,845 feet) above ocean level and it is the third highest railway in the world. Originally the train was built for social and economic reasons but nowadays it has mainly a great touristic value as a heritage railway. This traditional excursion begins from Salta city train station and goes along the Lerma valley, gets into Toro gorge and reaches the famous Puna. The journey ends in La Polvorilla viaduct which is 230 meters long and 63 meters high. This is a real full day excursion with 15 hour duration.