Colombia is not an expensive country. Travelers with limited budget can survive with about $ 50 a day, while those staying in comfortable hotels and eat at restaurants will spend between 70 and 100 dollars a day.

Some banks change cash and travelers checks, but others do not. This might happen, even with different branch offices of same bank. Some branch office change money and other branch offices of the same bank do not. This situation seems to vary constantly depending on the bank, the city and the day. The situation may also be complicated even more by local factors, such as a bank has reached its daily limit of foreign exchange. As if this was not enough, the banks usually have a currency exchange service with limited hours, which may be only one or two hours a day and usually in the morning. 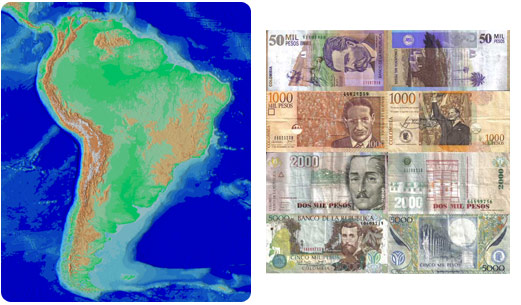 You can change dollars in cash on the street, but it is not recommended. The only place where this can be done is at the border, simply because this may be the only alternative. Credit cards (Visa is the most accepted) are valid for renting cars, buy plane tickets and pay the bill at most hotels and upscale restaurants. It is also often used to purchase consumer goods and to pay for services in many other businesses. There is a growing number of ATMs that accept Visa and Master Card that allow you to get money in Colombian Pesos.