Getting there & around Venezuela

There are direct flights to Caracas from Spain, the United States and Britain. To fly to Venezuela from any other country of South American or Central American it can be problematic and expensive. It is advisable to research all options thoroughly. You can also access by sea from the United States.

Travelers can embark on one of the freighters that sail from many ports arranged in the Gulf of Mexico.

Another alternative is to take the ferry from the Lesser Antilles, although the service between Venezuela and the Netherlands Antilles has stopped working. By land there are road connections from Colombia and Brazil, but not from Guyana.

Travelers planning to cross the border into Colombia for the dangerous steps of El Amparo de Apuche or Puerto Paez-Puerto Carreno, should consult their embassy for information on security conditions. In March 1995, the Colombian guerrilla attacks on army posts Venezuelan caused a buildup of troops on both sides of the border. 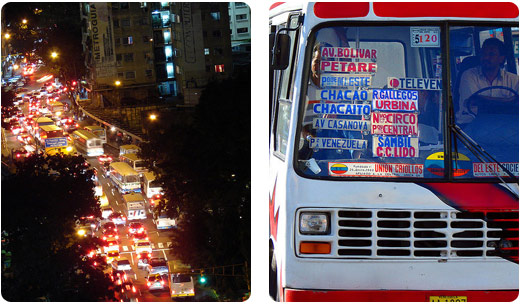 Avensa (along with its subsidiary Servivensa) was the largest airline for domestic flights, until 1999 when it declared bankruptcy. It currently operates on a reduced scale. Aeropostal has replaced its network of routes linking the major domestic destinations. Half a dozen small airline companies also operate regional services. Among them stand Aserca, Laser and Avior. The absence of a railway line means that the bus is the main means of transport to travel through the interior of the country. The service is usually fast, efficient and comfortable. From the bus terminal of Caracas, several buses depart to almost every corner of the country, with cheap prices due to the high degree of competition.

Travelling by car or motorcycle can lead to a greater flexibility. But anyway use a vehicle to enter the country or to rent one during your stay is expensive. It is also risky due to the scant respect of Venezuelans to the driving rules. You also can suffer arrests or discomfort in the control of the National Guard and police. It is advisable to follow the instructions and be prepared to show documentation or registration. Local transport is carried out on buses, cheap but crowded and in shared taxis which are fairly inexpensive. Caracas has a modern and economical subway system.