Paraguay is a state divided into 17 provinces plus the capital district is Asunción. Among its major cities we find Ciudad del Este, Alto Paraná, Concepción, San Pedro, San Juan Bautista, Fuerte Olimpo, Villarrica, Caacupé or Villa Hayes among others.
Paraguay is a country where every city has its own appeal, so for example if we decided to Ciudad del Este, know that this is a city where you can shop at numerous shopping streets. Assumption is moreover also a city where shopping, you’ll find high-quality accommodation and level, and excellent restaurants. For sightseeing, as well as Assumption, be sure to visit cities such as Incarnation, and their ability to visit the ruins of the various Jesuit missionaries who arrived in the city on the XVI and XVII century. 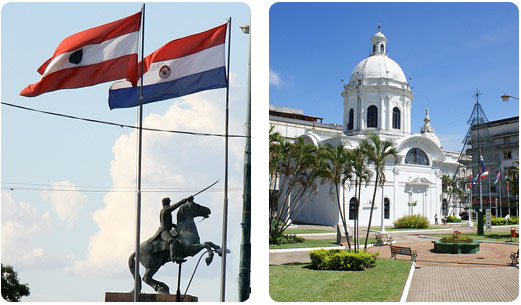 Cities with ecological interest, surrounded by nature and protected natural areas, with plenty of flora and fauna, cities with plenty of opportunities to enjoy a stroll by the river Paraná or Paraguay River, surrounded by nature and adventure, cities where power enjoy sportslike hiking, cities where you can enjoy a historic colonial with interest,monuments and numerous cultural attractions such as museums or ruins … Paraguay is a country where contrasts abound from one toanother city, a country where we can enjoy many alternatives.

Ciudad del Este, the capital, Asuncion, Aragua, Encarnación, Concepción, Paraguarí, Villa Hayes … Some of the most interesting cities to be found in Paraguay.

We described in the following links the best tourist destinations in Paraguay: