Despite its small size, the image of Uruguay is drawn following the relief of its beautiful scenery. Among its many attractions, we can find one of the most interesting capitals in South America, charming colonial towns and its famous beaches, known in all parts of the globe.

Uruguay is the second smallest country in the continent, behind Suriname. It is located on the east coast of the Southern Cone.

It borders with Brazil and Argentina to the north and west, in the south it borders with the great estuary of the Rio de la Plata and the Atlantic Ocean washes its eastern coast. Most of the country has a rolling topography that it is extended from southern Brazil.

Also in Uruguay two mountains ranges of low-rise are highlighted: The Cuchilla Grande and the Cuchilla Haedo. In the west of Montevideo the field is flattened, while in the east of the capital there are stunning beaches, dunes and headlands.

There are five rivers which flow into the Uruguay River, crossing the country in a westerly direction. The vegetation consists mainly of grasslands. There are not forests, except along some rivers and streams. In the Northeast, along the border with Brazil, the savanna covered with palm trees dominates the landscapes. There is little wildlife, but in the vicinity of major rivers it is still possible to find the rhea (a kind of American ostrich). 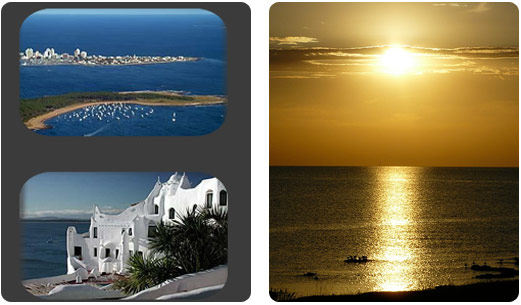 The climate is temperate, even in winter, and practically there is not frost. The temperatures in Winter (June-September) are between 10 and 16 Cº , while in summer (December-March) are moved between 21 and 28 Cº. Rainfall is evenly distributed throughout the year, with an average of 1,000 mm throughout the country.