Travelers are attracted by this narrow strip of land that is Chile, especially by the spectacular Pacific coast, large urban avenues, the highlands of the Andes and the opportunities to practice sports adventure. 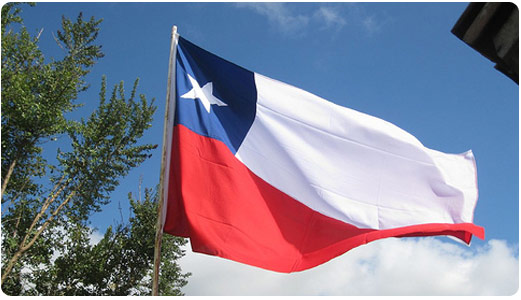 Chilean culture has survived the violence of its recent history, and is thriving again thanks to a population known for its warm and flexible character.

Although the community has one of the most important European sources of South America, indigenous traditions persist in the Andean foothills and the southern plains. It also has some of the most beautiful National Parks of the Southern Cone which attract hikers and climbers.

The writer Benjamin Subercaseaux described the narrow strip that is Chile, in the western part of South America, as “extravagance of the mad geography.” It stretches over 4,300 km, from the desert north to the glacial south, in the west it borders the Pacific Ocean, and is cut by the Andes to the east. It shares most of its extensive eastern border with Argentina, and borders Peru and Bolivia in the north.

Chile, with amplitude that rarely exceeding 200 km, is characterized by the sudden elevations of the lands from the coastline up to the Andean peaks (in excess of 6000 m). Latitudinal extremes of the country provide a varied repertoire of landscapes. The snow-capped volcanoes alternate with canyons crossed by rivers. The Great North, where some weather stations have never recorded rainfall, is opposed to Patagonia, with its storms and frequent snowfalls. The rugged coastline of Chile has many beaches and bays where fishing and swimming is possible.

Chile has got overseas territories such as Easter Island (3,700 km), the Juan Fernandez archipelago (700 km) and a portion of the southern island of Tierra del Fuego (which it shares with Argentina).

The variety of habitat offers distinctive flora and fauna which is protected by an extensive system of National Parks in the major attractions of the country. We can find in parks, vicuna (a kind of wild alpaca endangered), the Patagonian guanaco (a wild relative of the Andean llama), flamingos, pelicans, penguins, otters and sea lions. All of them are part of the Chilean ecosystem. The plant life includes stands of pine, cypress and rare larch (similar to the giant redwoods of California). Outside of protected areas, the increasing deforestation is impoverishing the landscape.

Chile’s climate is as varied as its terrain, with arid zones but surprisingly temperate in the north, a heartland which enjoys a Mediterranean climate, and the lands of Chilean Patagonia and Tierra del Fuego in the south, swept by the wind, rain and snow. The rainy season in the center of the country is from May to August, when temperatures are milder (about 10 Cº in July). The average in January is 28 Cº. Chilean Patagonia and Tierra del Fuego have summer averages (December-March) of only 11 Cº , these moderately low temperatures are less tolerable because of the strong winds. 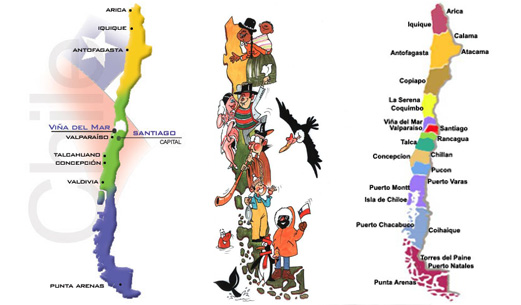