What to see on your trip to Bolivia?

Bolivia is a country completely surrounded by other nations and without an outlet to the ocean. The west of Bolivia is situated in the Andes mountain range, with its peak, Nevado Sajama at 6,542 m..The center of the country is formed by the highlands, where live the majority of Bolivians. The land east of the country is low and is covered by the Amazon rainforest. Lake Titicaca is located on the border between Bolivia and Peru. To the west, in the department of Potosí, lies the Salar de Uyuni, the largest salt flats of the world.The major cities are La Paz, Santa Cruz de la Sierra, Cochabamba, El Alto and Sucre.

La Paz is the administrative capital of Bolivia. It is also the departmental capital of La Paz. The city is located at an altitude of 3,600 meters above sea level, and forms together with El Alto (4,000 meters above sea level), the most populous urban Bolivia. It is the world’s highest city.
We recommend visiting the Church of San Francisco. Stroll through the market of the Witches’ Market (which sells potions including “magic”).
As for museums highlight two: Folkloric Museum Juan de Vargas and Precious Metals Pre-Columbian Museum.
Near the capital of Bolivia, Tiahuanaco is a place of great archaeological value of Bolivia.

Bolivia’s Cochabamba department, has an area of 55,631 square kilometers and 1,408,071 inhabitants. Its capital is Cochabamba. City known as the “breadbasket” for its variety of agricultural products using its status valle.Parte circuit of the three major cities in Bolivia: La Paz, Cochabamba and Santa Cruz.El local dialect is “Quechua.”
To highlight the Archaeological Museum and the Cathedral (of more than 400 years).

The department of Potosi in Bolivia, has an area of 37,623 square kilometers and 368,507 inhabitants. Its capital is Potosi. Famous since Spanish colonial times for its deposits of precious metals. This is reflected in the cultural heritage of the Castilian language when referring to something luxurious or high-value, it is said that “worth a Potosi.”

This lake offers a varied fauna composed mainly of ducks, fish such as suche, the mats and trout, as well as alpacas and llamas among others. The lake vegetation is classified as amphibious, submerged and floating, and comprises a major cycle elements of the ecosystem. Its flora is represented by 12 varieties of aquatic plants highlighting the reeds (Schoenoplectus reed), the yana llacho (Elodea Potamogeton), duckweed (Lemna sp.) And Purim (Chara sp.) The reserve also terrestrial riparian flora with over 64.

There are boats and boats of all shapes and sizes. There are boats that sail on skis and others are built of reed grass, or reed boats called “Totoritas” or reed horses as they did three thousand years ago in the pre Inca and during the Inca empire as much in this Peruvian area. Also in the coast there are hotels with saunas and restaurants.

The climate of Lake Titicaca is extreme, with large temperature variations between day and night. The ideal season to visit is between May and October, when the days are sunny, very rare rainfall and diurnal temperature reaches 25 ° C. The nights are always cold. 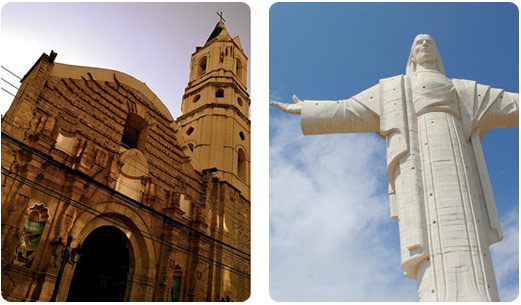 Santa Cruz de la Sierra, simply, Santa Cruz, is the second largest city in Bolivia with a population of approximately one million inhabitants.
The city was founded by Spanish captain Ñuflo de Chaves on 26 February 1561, which he called Santa Cruz de la Sierra in honor of his hometown of Extremadura Spain.
It is situated 400 meters above sea level, which offers a distinct advantage for visitors not accustomed to the altitude. Its average annual temperature is 25 C.
Capital of the country’s largest department, has public service infrastructure, hotel and telecommunications in a country where these facilities are conspicuous by their absence. It is home to numerous banks and international oil companies are operating in the country.
Sadly it is also known for drug trafficking.
It is curious that in your market there are indigenous forests to walk through it.

In the following links you can have more information about the best tourist places to visit in Bolivia: