Official name, Republic of Chile whose territory extends to the west and southwest of South America, bordered on the north by Peru, Bolivia to the northeast, east by Argentina and south and west by the Pacific Ocean . From north to south with an approximate length of 4,300 km and a width averaging 180 kilometers. On the southern coast of Chile are a number of islands, from Chiloé to the Diego Ramirez Islands, the southernmost point of the American continent between them may be mentioned Chonos archipelago, the islands Guayaneco and the western part of Tierra del Fuego. Other islands belonging to Chile are those of Juan Fernandez, Easter Island, Sala y Gómez, San Félix and San Ambrosio, all in the South Pacific. The country has a total area of 756,626 km ², excluding the Antarctic area are claiming (Chilean Antarctic Territory). Together all the territories whose sovereignty claims, the South American country amounted to 2,006,096 km2 of extension. The capital and largest city is Santiago, with a population (estimated for 1998) of 4,703,954 inhabitants. 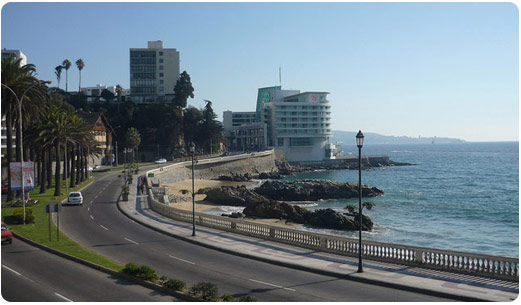 Chile has a border dispute with Argentina, established since the 1881 Treaty and referred to the area of the Southern Ice Fields, which extend, on the Chilean side, between the regions of Aisen del General Carlos Ibáñez del Campo, Magallanes and Antartica Chilena. Both countries are reviewing, through various committees, the respective thesis to give a resolution that is satisfactory to the parties. However, several obstacles have prevented political and parliamentary close this chapter (in this respect, arbitration ruled Chile). This conflict is the last remains of the 24 unresolved bilateral disputes that have been affecting the normal relations between the two southern countries of South America. The two national congresses have refused to ratify the agreement reached in 1991 by Presidents Carlos Menem and Patricio Aylwin.

The main cities of Chile:

In addition to Santiago, Chile’s most important cities are Concepción, agricultural and industrial center with a population (estimated for 1998) of 372,252 inhabitants, Valparaíso, the main sea port, with 293,800 inhabitants, Viña del Mar, a popular tourist with 335,512 inhabitants, and Antofagasta, with 251,429 inhabitants.

We describe in the following links the best tourist places to visit in Chile: