When to go & weather Ecuador

It is possible to visit Ecuador throughout the year. Regarding the weather, you must take into consideration El Niño. This phenomenon appears strongly about one winter every decade, it destroys roads and rail links, and it cuts communications in some remote areas.

In the Galapagos Islands, the warm rainy season from January to April is the best time for diving, the rest of the year the water is colder, usually about 20 Cº .

The mainland coast has a similar climate and its beaches are busy from January to May, months that lie between the school holidays.

Between June and August the foreign tourists arrive, although the weather is colder by then.

The dry season in the highlands (the best time for hiking and climbing) is extended from June to August, coinciding with the wettest months in the Oriente region.

To visit the forest is preferable to go in late August and February during the driest season.

The high season in both the mainland and Galapagos, usually involves from mid-December till January and from June till August, when most of the travelers visit Ecuador.

Holidays and celebrations:
Ecuador is a country with Roman Catholic tradition, so many of their celebrations are governed by the liturgical calendar. They present a mix of sumptuousness and elements of indigenous traditions. The people of the rural areas live these celebrations with great intensity.

The Day of “the dead people”, in November 2nd, is especially beautiful when the flowers which are placed in tombs, fill with color the cemeteries, making happy the environment although the sadness of the event itself. Other events of historical interest are the anniversary of Simon Bolivar, on 24 July and Columbus Day, October 12. 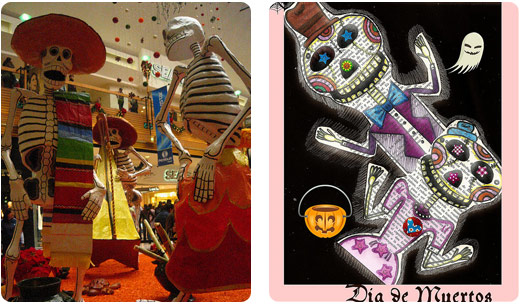 The Day of the dead people

At Carnival, Ecuadorians organize water fights and some festivals related to the fruit and flower. Corpus Christi, is held between May and June and it coincides with traditional harvest festivals in many towns in the highlands.

Big cities are paralyzed on commemorating its founding day or the independence days. The most important cities are Guayaquil, Otavalo, Cuenca and Quito. The accommodation and transportation are often full during the holidays, so you should reserve in advance.