The Monument to the Andes Army

Mendoza is an Argentine Province, located in the western central part of Argentina in the region known as Cuyo. It borders to the south with La Pampa and Neuquén, to the north with San Juan, to the west with the republic of Chile and to the east with San Luis. The international limit is the Andes mountain range. It’s the seventh biggest province of Argentina and it is the fifth largest populated province of the country.

The city of Mendoza is an amazing oasis with its great beauty and its landscapes trimmed by mountains, the plateau and valleys. It works as a commercial, cultural and administrative center of the province.

In Mendoza there is a big industry dedicated to the grape growing and wine production. Besides, this spectacular city offers a wide range of different activities adaptable to the most eclectic tastes, for instance you can practice rafting or kayak, climbing, exploring caverns or catching sight of wild flora and fauna during the best months of summer.

Distances in kilometers from Mendoza city. 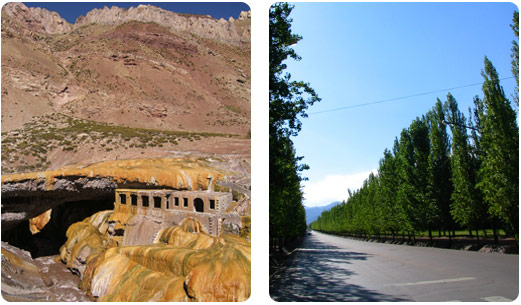 Places to visit in Mendoza

The Commercial Center with the most varied commercial supply.

The Foundation Area where there is a museum that registers the evolution of the place throughout the years; also an Underground Camera, with valuable archaeological rest of the antique city of Mendoza; and a backyard with sculptures with high artistic value.

It invites visitors to cross it over and enjoy its attractive cultural supply, with the historical museum and the Public Library in honor to General San Martin.

It is the neuralgic center of the new city urban design and it hosts the artisan fair and the Modern Art Museum.

It constitutes a true green lung of the city and it includes the famous Cerro de la Gloria monument (The Monument to the Andes Army).

The Park was completely designed by the French landscape architect Carlos Thays, it represents a really must-see stroll with its classic sculptures, sources and beautiful gardens.

It is a mandatory excursion when you travel to the province of Mendoza because the presence all the time of high mountain peaks in the far horizon makes a great attraction that invites the tourist to enter a world of giants. This excursion will allow you to see different landscapes such as valleys between the mountains, the river Mendoza and the plain in which the city is found the smaller summits of the pre-mountain range until reaching the highest summits of the Andes.

The excursion has full day duration and it is long, therefore, we recommend you to depart from Mendoza city early in the morning.

During the full day excursion entitled High Mountain you will be able to observe the Inca Bridge which is a unique natural formation that resembles a bridge which crosses Las Cuevas River. There is a valuable thermal water source.

It is one of the best tours to take in Mendoza because it shows the working skills of the inhabitant of Mendoza, the wineries area and the beautiful country houses that surround it. To make an approach to the world of the elaboration of fine wines constitutes an adventure for everybody.

The amazing and wild south of Mendoza province is filled with several options for tourists who wish to spend a full day there.  You have to travel several km to arrive there, but they are worth it because the excursion will have the essential ingredients for an unforgettable adventure: Wild nature, simple lunch in a cozy place or practicing of rafting in the rapids or to sail aboard the quiet catamaran through the lake of the Los Nihuiles dam. 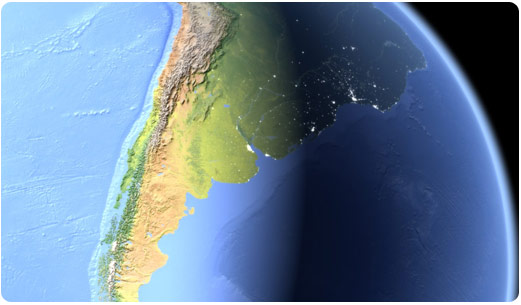 It is the highest peak in America (6,965 meters over the sea level)

It is located in the Argentine side of the Andes range and mountain climbers, trekking tourists and eco-tourists in general visit it all the year long.

The typical phenomenon which experience those that remain in the Cerro Aconcagua for several hours and in certain conditions is known as the apunamiento, this disease not only includes the malaise by the height and the lack of oxygen, but also it has other symptoms such as feeling nauseous and get headache.

The Aconcagua mount was created by the bending of the Nazca Plate beneath the South American plate during the geologically recent Andean orogeny; however, it is not a volcano.

It is an awesome half day tour that will allow you to visit the pre mountain range location in Mendoza where a traditional Hotel de Turismo Villavicencio has a marked style of the 50´s and the most famous mineral-water fountain in Mendoza are found.

All in all Mendoza, the land of sun and good wine, is an oasis filled with urban elegance, beautiful green estates and perfect products found right in the middle of the pre-mountain range desert. Mendoza is a unique destination for adventure as well as for rafting, climbing and for the amazing tour to the vineyards and wine cellars.