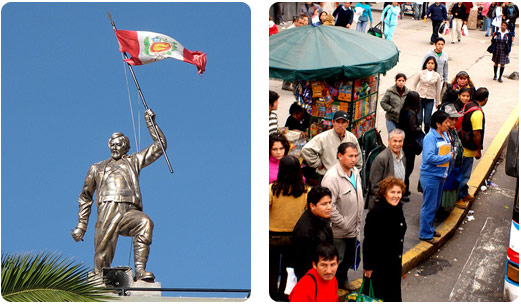 Hero of Independence of Peru

Religion: More than 90% of Catholics and a small Protestant population.
Government: constitutional republica.
GDP: U.S. $ 56 900 million.
GDP per capita: $ 2,060.
Annual growth: 1.8%.
Major industries: Coffee, sugar, cotton, pulp, paper, coca leaves, fish and fish products, petroleum, zinc, steel, chemicals, minerals, cement, automobile assembly, shipbuilding
Major trading partners: U.S., Japan, United Kingdom, China, Germany, Colombia, Chile, Brazil, Venezuela.
Health risks: Vaccinated not essential, but if you plan to visit the Amazon rainforest it is appropriate to do so against yellow fever. You also may be immunized against typhoid, tetanus, polio and hepatitis A and B. In the mountains, above 3,000 m, you may affect elsoroche or altitude sickness. Relieved by resting and drinking coca tea. On the coast you have to protect from mosquitoes and the sun which is very strong by the proximity of Ecuador. In any case the care in hospitals is correct. and clinics are correct.
Local time: GMT-5
Electricity: 220 V, 60 Hz
Weights and measures: Metric

In Peru, the prices are generally lower than in Europe, but it is less affordable than its neighbor’s countries. Lima and Cuzco are the most expensive cities. Travelers with limited budget can spend the day with 50 to 80 dollars, but if they stay in a comfortable hotel and eat at a restaurant they will spend 120 dollars per day. In the most popular destinations as Machu Picchu, deluxe hotels can cost $ 250.

It is advisable to take dollars, because other currencies are redeemable only in large cities and they charge a very high commission.

Currency exchange can be done at banks, exchange houses, first class hotels or in the street (people who are around financial places, but never offer better rates than the banks themselves and the tourists take the risk of being cheated). 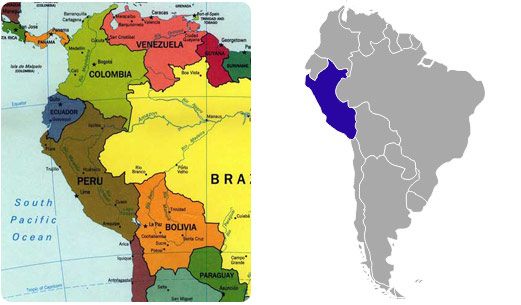 Map of Peru in South America

The simplest is to go to an exchange house. The rates vary from one place to another, but not significantly, except in some hotels that charge a relatively high commission. It is cheaper to change travel checks.

The most accepted credit card is Visa, but it can result in an increase of 8 percent as a commission, unless it is used to withdraw cash from an ATM (always in Peruvian currency).

In hotels and restaurants of a higher grade, in the invoice will be added taxes for the waitress service (it can represent up to 28 percent of the total).

However, the cheaper establishments do not include such taxes. In the modest restaurants tipping is voluntary, but in the most luxurious one it is customary to leave between 10 and 15 percent of the total if in the account is not included the service.

Taxi drivers are not offered a gratuity: You must bargain considerably in advance and you should not give up on the price agreed. The local guides are often reclaiming 3 or $ 5 per day. In the markets, bargaining is the norm. 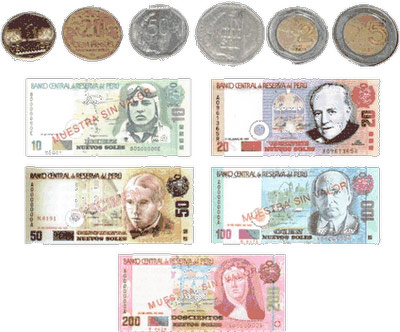