Many of the best attractions in Paraguay are within walking distance of the capital Asuncion, including the city of Itaugua which is consider as the capital of tissue, where the famous spider web with añandutalace is made.

The Aregua and San Bernadino beach resorts are located also very close from Asuncion and in the Lake Ypacara. To the west, is located Caacupa, the most important religious center in Paraguay and place of annual pilgrimage.

To the south, the tranquil and undeveloped National Park Ybycua, which retains one of the few forested areas in the country. 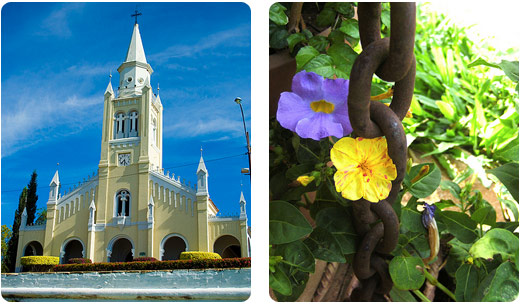 Southeast of the capital is located Trinidad, a Jesuit outpost situated atop a hill that was built between 1706 and 1760. His most important work, the church, is wonderfully preserved. You can also visit other Jesuit ruins in San Ignacio and Santa Maria Guazu.

Lakes and rivers in Paraguay

Something more contemporary is the Itaipu dam, the world’s largest hydroelectric project (1,350 km ²), which is worth visiting. It is also interesting the National Park Cerro Cora, an area of tropical dry forest and savanna, sheltered by steep and isolated hills.

It contains many important cultural and historical remains, such as pre-Columbian caves, petroglyphs and the place where Francisco Solano Lopez died at the end of the War of the Triple Alliance.

Travel and tours to Paraguay