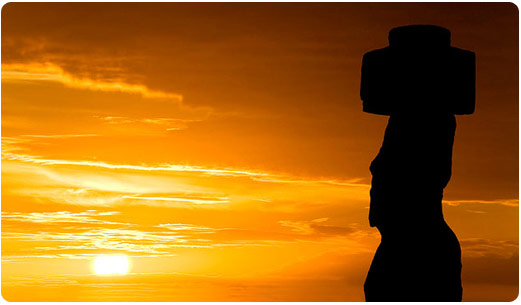 The enigmatic Easter Island, 3,700 km west of continental Chile is the most remote inhabited island (you can browse more than 1,900 km in any direction without seeing any land inhabited). It can actually be considered a more Polynesian island than a Chilean one. Though there is presence of Pacific people living there, this isolated island goes on being a mystery.

It is also puzzling how the population was able to design and sculpt the hundreds of colossal statues (moai) on the hard volcanic basalt, and transport from the inland quarries to the coast. Chile officially annexed the island in 1888, during the period of expansion after the Pacific War.

It is home to about two thousand people, mostly in the town of Hanga Roa. 70 percent of the population is of Polynesian origin, while the remainder comes mostly from the continent. The island is now a national park and has some 300 moai and other stone buildings.

Travel to the Easter Island