Ecuador, the smallest country in the Andean highlands, is one of the most rewarding destinations in South America.

With a wide variety of indigenous cultures, well preserved colonial architecture, with volcanic landscapes and dense rainforest, its territory in its small size offers many attractions for the traveler.

Moreover, from its beautiful capital, Quito, is easy to get tours to the surrounding Amazon jungle, climb an active volcano, haggle with indigenous artisans or take a nice swim on a tropical beach.

And all of this is included in a country slightly larger than half of Spain.

If you squint your eyes to a map, Ecuador resembles a grinning skull peering through their lonely Pacific overseas possessions, the remote Galapagos Islands. The Ecuadorian  archipelago, since 1832, is considered one of the treasures of natural history in the world. The unique diversity of flora and fauna enhances the curiosity of both environmentalists and the restless souls. Galapagos is expensive to visit, but when it is compared with the continental adventure and the uniqueness of the experience, the traveler feels almost obliged to set aside budgetary considerations. 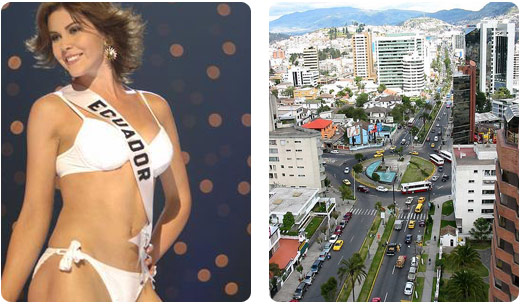 Ecuador is crossed by the Equator line and is located at the northwestern tip of South America. It borders Peru to the south and east, with Colombia to the north and the Pacific Ocean to the west.

Quito, the capital, is located in the center of the far north, in an Andean valley only 22 km south of Equator line. Guayaquil, the second city in the nation and the only port in the country, is located in the warm south coast, north of the Peruvian border.

The country can be divided into four regions: The western lowlands of the coast, the central highlands of the Andes, the eastern jungles of the Amazon basin and some 1,000 km away west of the continent, the Galapagos Islands.

The first region, which was full of forests long time ago, is nowadays covered by banana, palm and cocoa, and has little interest for most travelers. Only a few protected areas, such as Maquipucuna Biological Reserve, allow seeing a glimpse of the spectacular old woodlands. The Andean region, the backbone of the country, is composed of two volcanic ranges separated by a central valley where most of the population lives. In that region we can find the country’s highest mountain, Chimborazo (6,310 m), whose summit is the furthest point from the center of the planet, thanks to the bump in Equator line.

The lowlands of the Amazon basin are formed by a tangle of almost impenetrable rain forest known as the Ecuadorian East region. Although the Amazon River does not pass through Ecuador, all rivers east of the Andes flowing into it. The world famous Galapagos Islands were the first National Park in the country and are renowned for their unique wildlife.

Thanks to its mild climate and wide variety of habitats (alpine grasslands, coastal swamps, tropical rainforest); Ecuador is one of the richest nations in species of the earth. Known by ecologists as the land of the mega diversity, it has three hundred species of mammals, including monkeys, sloths, llamas and alpacas.

The birdwatchers come from all parts of the world to admire the famous Andean condor, but also there are many other birds living with it, and about half of the 58 bird species found in Galapagos are endemic. The freshwater fishes are also exotic: electric eels, stingrays, piranhas and the tiny candiru.

The only predictable things with the weather in Ecuador are the sudden changes, and it is not strange being able to cover the entire spectrum climate during a single day. 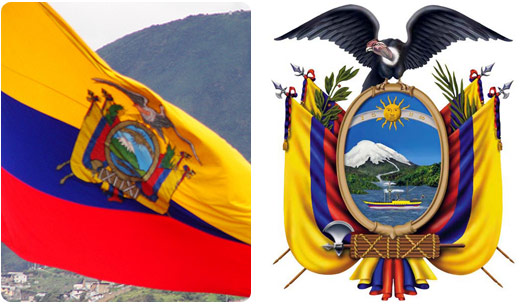 In general, there are two seasons, wet and dry, but the climate varies greatly according to geography. The areas of the mainland coasts and the Galapagos Islands are influenced by ocean currents and are hot and rainy between January and April, which is considered a bad time to visit the islands.

If you approach to the beaches from May till December you will find cooler temperatures and low rainfall. In the highlands, the dry season is centered between the months of June and September and around Christmas, but even the wet season is not particularly rainy. The climate in the central valley is generally spring all year round, with temperatures no higher than 24 Cº.

In the East there are rains monthly; July and August are the most prolific, and the period between September and December, the driest. This region is as hot as the coast.

In 1999, President Jamil Mahuad banned the creation of more oil fields, mining, logging and colonization of the National Parks of Cuyabeno and Yasuni-Imuya. This area of almost 1.1 million hectares encloses part of the greater diversity of flora and fauna of Ecuador and is home to several indigenous tribes.