Getting there & around Brazil


Since the majority of cities in South America, scheduled flights to Rio de Janeiro are operated. The other important airports in the country are Sao Paulo, Recife and Manaus, capital of Amazonas state, halfway between Rio and Miami.

Brazil borders all South American countries except Ecuador and Chile. From Uruguay is possible to access by bus.

From Bolivia on the train known as the trem da morte (death train).

It is also possible to enter Brazil through the Amazon River, on the slow boat that sails from Iquitos in Peru. From Asuncion, Paraguay it is possible to access across the river to the Pantanal.

Domestic flights in Brazil are lowering their prices because of the recent deregulation of this market. It is advisable to compare several offers of promotion before purchasing the ticket, not to mention that some airfares are cheaper during the overnight flights.

Except in the Amazon basin, the transport of choice for most Brazilians is the bus, which is usually excellent and inexpensive. The main cities are connected by bus lines that offer several daily departures: Between Rio and Sao Paulo, for example, there is at least one bus every fifteen minutes during peak hours. Not so with the railroad: the tendency is to cut the train services even more. However, train enthusiasts will be glad to know that there are still some beautiful running rail routes, including linking Curitiba and Paranagua.

Although, due to the construction of an extensive network of roads, river transport has fallen, you can still travel by boat between some of the towns situated on the banks of the rivers Sao Francisco and Amazon. Driving in Brazil is a bad experience: The traffic is anarchic and extremely dangerous, especially at night, when many drivers prefer not to use the lights. 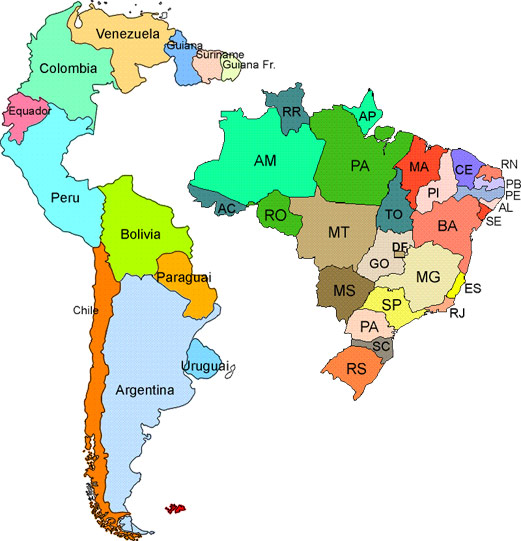 Although a practical way to reach many parts of the country is by car, it must be done with patience, documentation in order and the corresponding insurance. It is also important to mention that cycling is more dangerous than driving by car and it is not recommended.