The Amazon is a giant mosaic of rivers and forests that cover half the country and extends to neighboring countries. The stretch of the Amazon River flows between the cities of Manaus and Belem. Thanks to the junction of several rivers, it provides with a navigable route to the boats that go to the Atlantic Ocean.

Accommodation in the Amazon jungle

The forest still retains many of its secrets, and numerous tributaries of the river are still unexplored.

In the Amazon, there are about 15,000 species but still thousands of birds and hundreds of fish and mammals are not classified. Among the known animal species, there are some common, others more exotic and other ones almost-extinct, for instance we can find jaguars, tapirs, peccaries, spider monkeys, sloths, armadillos, alligators, river dolphins, boa constrictors and anacondas. 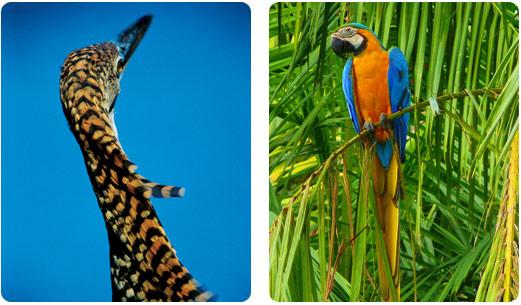 Birds of the Amazon jungle Brazil

In terms of birds can be seen toucans, parrots, macaws, hummingbirds and hawks; there are also over 1,800 different species of butterflies and more than 200 species of mosquitoes. The river has such a diversity of fish, like piranhas, tucunares, piraracus, painted and electric eels.

Animals of the Amazon jungle Brazil

The city of Manaus is the starting point for most of the excursions which are taken in the Amazon and it is located on the shores of Black River. Although Manaus is described in countless guidebooks as the land of the wonders of the Amazon, the truth is that the city has little appeal and a high crime rate. Its most significant symbol is the Amazonas Theater, an opera house with a Renaissance style, designed by Domenico de Angelis in 1896 during the rubber boom.

Horses in the Amazon jungle Brazil

The boat trips through the river provide a much direct contact with the vegetation and the abundant variety of birds of the jungle; in addition, these trips provide the opportunity to see how the life of caboclos is (inhabitants of peoples of the Amazon River) in the vicinity of Manaus.

Port of the Amazon jungle

However, during the trip it will not be possible to see either Indian tribes or herds of wild animals, since in both cases the encounter with the man has been synonymous with destruction and therefore they tend to flee from the areas easily accessible.