Venezuela is a country of striking beauty and dramatic contrasts: In the west, the snowy peaks of the Andes. In the south, the Amazon rainforest Hamedan. In the East, the beauty of the Gran Sabana, with its flat-topped mountains. Along the entire Caribbean coast of 2813 km long, 1,700 km of sandy beaches lined with coconut palms. 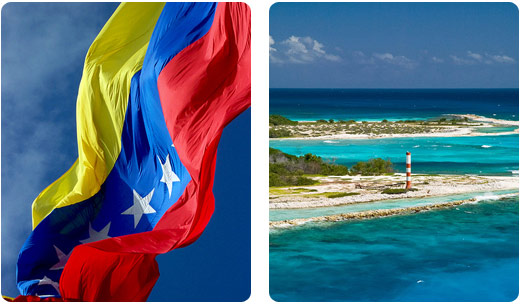 The largest lake in South America, the Maracaibo, and third longest river, the Orinoco, are also found in Venezuela, a country that boasts the world’s highest waterfall, Angel Falls.

Also the country is home to a wide variety of exotic fauna and flora, among we can find the jaguar, ocelot, tapir, armadillo, anteater and the longest snake, the anaconda.

Venezuela is located on the northern coast of South America, between Colombia and Guyana and northern Brazil.

The massif of the Guiana dominates the Southeast.

The  30% of the central territory consists of the Llanos, a vast grassy savanna drained by the third longest river in South America, the Orinoco. In the Northwest we can find the largest inland lake on the continent, Maracaibo, surrounded by lowlands, fertile and marshy. In the south of the lake it raises the northern tip of the Andes and it reaches 5007 m altitude in the Pico Bolivar. In the highlands, some high Andean meadows with a swampy character, grow some of the most striking plants in Venezuela. In the tepuis (huge flat-topped mountains, located southeast of the country), especially in Roraima, the flora also has rare species.

The climate is predominantly tropical, with a hot zone, but temperate along the coast. Exceptionally, the temperatures oscillate a few degrees (18-20 Cº Caracas, Maracaibo 27-29 Cº ); therefore, climate zones are defined more by rainfall than by temperature differences. The lowlands of the north coast are relatively dry, but rainfall increases as one approaches the Llanos and the Guiana Highlands, with an annual average of close to 1500 mm in both regions. The dry season (summer) lasts from December to April and the rainy (winter) during the rest of the year. The Amazon region doesn’t have dry season because the rainfall exceeds 2000 mm, distributed evenly throughout the year. The dry season is more pleasant to travel, especially for those who plan trips on foot.