It is named Bolivia in honor of the Liberator Simón Bolívar. The capital of the Republic was called Sucre, in recognition of the Mariscal Antonio Jose de Sucre.

The history of the territory that is today the Republic of Bolivia goes back to the cultures that developed in the Andean highlands, as Viscachanense the Ayampitinense, fluke, the Wancarani, the Urus and particularly Tiwanacota characterized as the first Andean Empire, whose domain is the first planned city built in the region: Tiwanaku.

During the development of the Inca Empire, the area corresponding to Bolivia became known Collasuyo, being predominantly occupied by Aymara settlements. 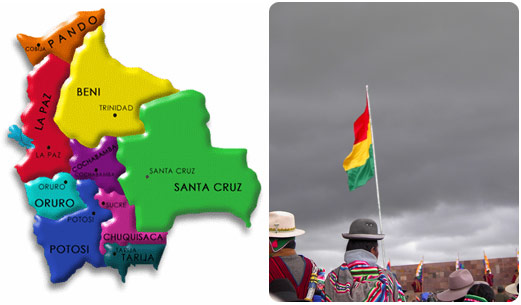 Map of Bolivia and Bolivian flag

The arrival of the Spanish in 1532, dismantled the organization that worked for centuries in the region, introducing a new political institutional structure, based on the exploitation of nonrenewable natural resources. To meet the objectives set, the conquistadores organized the territory and founded cities with defined roles in strategic areas to their interests.

During colonial times, the momentum of the exploitation of silver and at the time of the Republic, based on the exploitation of tin, we developed a predominantly mining economy with intensive use of scarce manpower and coordination with other sectors productive activity.

The role of regional producer and exporter of non-renewable natural resources, allocated from the colonial period, until late 1940 and early 1950, when efforts were made to diversify the productive structure of the country.

Today, Bolivia is experiencing a process of redefining its ties with the global economy and reorganization of its production structure in a context of deepening of democratic life and to reorient the role of government in the economy.