Getting there & around Colombia

The geographical situation of Colombia, on the northern part of South America, make that the country has got good and relatively inexpensive connections with Europe and North America. Most visitors fly to Bogota which is the main international airport in the country. The other important international airports are located in San Andres and Cartagena.

The country is connected by road only with Venezuela and Ecuador.

Travelers who have thought about crossing the dangerous border posts Arauca-El Amparo de Apure or Puerto Carreño-Puerto Paez in Venezuela should consult their embassy to know the security situation in the area.

In March 1995, the Colombian guerrilla attacks on Venezuelan army posts resulted in a border clash between troops from both countries.

The more intrepid can enter Colombia from Panama by the passage of the Darien, which is located right in the dense and dangerous forest and it disrupts the Pan American Highway. The trip takes about two weeks, it is recommended to take a guide, plan ahead and go armed with a high degree of self confidence and a good dose of good luck. The guerrillas are active in the area, and kidnappings are common, so caution should be used. 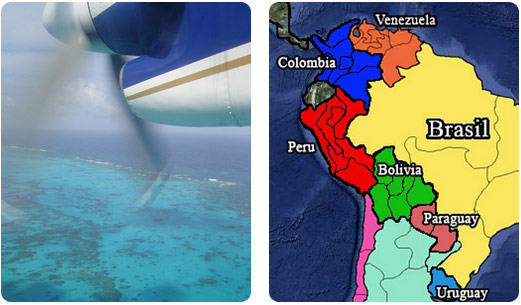 The ports of both the Pacific and the Caribbean allow reaching or leaving the country by boat. Maritime traffic is abundant on the Caribbean coast: the ships come and go frequently between the United States, Mexico, Central America, the Caribbean islands and Venezuela. The most important Colombian Caribbean ports are Barranquilla, Cartagena, Santa Marta and Turbo. The largest Pacific port is Buenaventura.

Colombia was the first South American nation in having their own airlines: SCADTA was founded in 1919 and later changed its name to Avianca. At present, it has a well developed air system and one of the densest networks of domestic flights throughout Latin America.

The open skies policy that defends the country began in 1991 and has led to the emergence of several new companies and a wide variety of aircraft, from jumbo jets to any device that flies. The rates are relatively high (Avianca and SAM are the most expensive airlines), but some new companies are offering laughable promotions. Do not forget to reconfirm reservations at least 72 hours in advance and be prepared to suffer flight delayed or postponed.

The bus is the main transportation to move around the country and it is cheap, efficient and has got a widespread net. Unfortunately, the roads except the main roads are very defective. Going through the cities by bus can be slow, and vehicles are usually crowded. However, taxis are cheap, and can be used to travel long distances.

Others mean of transportation are the goats (old-fashioned wooden bus used primarily on roads in the Colombian provinces), and Colectivos a mix between bus and taxi, used on fixed routes. There is no train service in the country, and travel with their own vehicle (car or motorcycle) is not recommended because it can be dangerous and expensive. Shipping, especially in the Pacific coast, where there are no roads, is irregular and precarious.