Puerto Madryn is the gateway to the Valdes Peninsula where there is whale´s watching, also to the penguin’s reserve in Punta Tombo and to the Welsh traditions in Gaiman.

Puerto Madryn town is located in Chubut province in the Argentine Patagonia and it has a population of about 65,000 inhabitants.

Geographically it is situated on the shores of the New Gulf and standing at the foot of the cliffs of a plateau featuring an imposing and amazing view of the Atlantic Ocean.

The Penguin's reserve in Punta Tombo

Due to its geographic location Madryn presents particular climatic features. For instance, rainfalls are scarce all year long and the annual average temperature is approximately 14º Celsius. Maximums reach up to 35º Celsius during the summer and minimum temperatures drop up to 5º Celsius in the winter.

You can arrive in Puerto Madryn by plane because several airlines fly from Buenos Aires with daily services to both Trelew and Puerto Mardyn.

You can get there also by bus or by car through National route 3. There are 1,400 km distance between Buenos Aires and Puerto Madryn.

Puerto Madryn is considered as one of the fastest growing cities in Patagonia Argentina and nowadays it counts on with several residential areas over a beautiful coast avenue where the houses have got an incredible sea view.

The port of the city is considered as one of the best in Argentina because it has got deep waters.

The most important incomes of the city are the industry mainly focused on aluminum production, fishing and tourism.

The distances in kilometers from Puerto Madryn to other Argentine tourist cities are:

The fauna Seasons are the ones we described below:

The Whales can be seen from May to mid December, the Penguins from October to mid April, the Dark Dolphins from December to March, Orcas from January to April and from October to December.

Puerto Madryn is the starting point from where many interesting sites which are unique in the world can be visited.

For instance the main excursions to take when you are in Puerto Madryn are:

The excursion to the Peninsula constitutes the most important circuit in the region. It includes a drive around the peninsula of about 400 km. round trip. During the excursion you can visit the Carlos Ameghino Isthmus where there is a center of interpretation which works as an introduction to the fauna, flora, history and geography of this awesome natural sanctuary.

After that you can visit Puerto Pirámides. It is a small village that offers accommodation and food facilities. Also the whale watching tours leave from this little town on boats. The whale watching is available from May to mid December and it is a wonderful show that is renewed and happens every year allowing you to experience a magnificent view of the deep blue ocean with these giants.

After that you can go to La Lobería where sea lions can be observed. (Their reproduction period is during the summer.)

Finally you can stop at Punta Pardelas which is an ideal beach resort for fishing, diving, snorkeling or in Punta Delgada, where there is an old lighthouse that was converted to a hotel.

This reservation is located 170 Km away to the south from Puerto Madryn. Every year, during the Argentine Spring arrive at the Patagonia coasts half millions of Magellan Penguins in order to breed. The opening of the season is approximately in the early days of September and it lasts until early April.

When you visit this Natural Reserve you can walk among the penguins, follow them and learn their habits so closely like you never imagined you could…

This is a special place devoted to preserve these species and its natural habitat so it is very important being respectful with these tender animals inside the fauna reservation. The reservation has 290 hectares so this large space allows the cohabitation of a lot of birds and both marine and steppe mammal species like rheas, guanacos, maras, seagulls and cormorans.

Excursion to Gaiman, a Welsh town

This is a small town with 6500 inhabitants and it is located at the Lower Valley of the River Chubut. Gaiman nowadays is the symbol of Welsh colonization in Patagonia; it is a town full of history, undoubtedly, where you can discover the attitude of Welsh people by walking around the streets of Gaiman.  You also can visit farms, typical chapels and Welsh-style houses. But undoubtedly the main attractions are the Welsh Tea Houses, where you can be served the greatest classic Welsh tea with the pastry by the descendants of the Welsh settlers.

At Gaiman you also should visit the Museo Histórico Regional, located at the ex-Chubut’s railway station and the Bethel Chapel (“House of God” in Jewish). 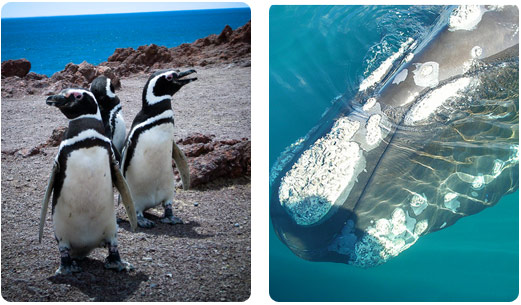