Christ of Rio and Rio Carnivals

Surrounded by ocean on one side and mountains on the other, Rio de Janeiro, one of the most beautiful places in the world, concentrated around seven million inhabitants, known as Cariocas, who enjoy the pleasures that everyone has free access: The beaches, the cult of the body, samba, beer, football and cachaca, a homemade brandy.

But Rio also has very serious problems: A third part of the population live in favelas (slums), covering many hillsides, the poor people have no schools, medical or employment, drug and violence are endemic problems and corruption and police brutality are widespread.

Rio is considered a dangerous city, which has resulted in a drastic reduction in tourism in recent years. Currently, there is a special police unit responsible for supervising the areas visited by foreigners in an attempt to maintain their physical integrity.

According to latest reports this police task is doing a success work.

Rio is divided into a north and a south zone by the Serra da Carioca, steep mountains that form part of the Parque Nacional da Tijuca. Corcovado’s summit, 750 m in height, topped by the statue of Christ redeemed, is the place to get an idea of the geography of the city with slums on both sides of the mountain. At night, the statue of Christ shines bright and is visible from the city. Christ’s left arm points out toward the north and towards Maracana and it is clearly seen in the foreground. Opposite the statue is the Pao de Azucar, the typical image of the postcard. It is recommended to climb the mountain on a clear day, not to be disappointed.

The common denominator is the beach in Rio, a ritual and a way of life for the Cariocas. Copacabana beach is probably one of the most famous in the world, with an area of 4.5 km along is considered one of the most densely populated residential areas of the planet. From the undulating beach, you can see the granite blocks that surround the entrance to the bay.Copacabana, one of the most famous beaches in the world, needs no introduction, is spectacular and very popular, is located in the ocean and surrounded by craggy mountains. The sun is shining, the cameras do not stop shooting, the money changes hands often and the fun is breathed in the salty breeze.

Copacabana, so great in real and figurative sense, occupies only about 4.5 km off the coast of the Atlantic Ocean, although in this narrow strip of sand has one of the highest population densities in the world, with 25,000 persons per km square. Both, day and night, always something is happening on the beach, drinking, singing, eating and people of all social classes contemplates the scene. Tourists watch the Brazilians, and vice versa, also the poor of the slums do not take away an eye on the rich, while the rich people avoid returning the gaze.To the southwest of Copacabana is located Arpoador, a small beach resort where you can surf, even at night, because it is illuminated. There is a huge rock that projects into the ocean from which you get a good view.

Ipanema, like the neighborhood, is the richest and most chic beach in Rio. There is less noise than in Copacabana, and is safer and cleaner. The different parts of the beach attract different groups of people. Garota Beach, which is located just behind the Rua Vinicius de Morais, is also known as the “Cemitario dos Elefantes because of the old hippies, artists and leftist who frequent this place.

The beach in front of Rua Farme de Amoedo is frequented by gays. Ipanema is an Indian word meaning “dangerous waters.” The waves can be large and dangerous for practicing surf. Caution is advised and it is recommended to swim only when the locals also do. Other beaches in the city are the Pepino, Barra da Tijuca, Flamengo and Arpoado The Pao de Azucar (Sugar Loaf) is the image most exploited of the postcards. There are two elevators which take visitors up to 396 m above Rio and Guanabara Bay. From that panoramic point Rio de Janeiro seems to be the most beautiful city in the world. Pao de Azucar is almost too good to be true. The best time to go is during the sunset on a clear day when the light goes down and the city lights begin to flash. It is recommended to visit it between 10 am and 11 am and between 2 and 3 pm, when buses arrive loaded with tourists. The two cable cars leave every 30 minutes from Prasa General Tiburcio in Urca. There are 50 routes for climbers; one of the best hiking is to go along the back of the Pao de Azucar.

From the rainforest that once surrounded Rio, nowadays only 120 km² of Tijuca National Park still remain, and this Park is located about fifteen minutes away from the concrete jungle of Copacobana, it is a lush green forest, with beautiful trees and magnificent waterfalls. Tijuca National Park is all that remains of the rainforest that used to surround Rio de Janeiro. It is hard to imagine a contrast so sharp and fast. The jungle is lush and verdant, with beautiful trees, streams, waterfalls, mountainous terrain and high peaks.The park is home to great diversity of birds and other animals, including iguanas and monkeys. It also has excellent trails, with the possibility of various excursions. The heart of the forest is the beautiful Alto da Boa Vista, with several waterfalls, (including the Cascatinha Taunay, 35 m) peaks and restaurants.

Maracana stadium is the temple of Brazilian football. It is a giant among beaches with a capacity of over 100,000 people. If you are interested, even slightly, for the sport, or you just wish to get another point of view of the country, a soccer match is entirely advisable – preferably if it’s championship or a derby including the most popular teams like Flamengo versus Vasco or  Fluminense versus Botafogo. The experience can be intense, almost psychedelic. The Sports Museum has got photos, posters, cups and uniforms of the best players. Cathedral Metropolitan the construction works of the ultramodern Cathedral Metropolitan which has got a conical in shape, were started in 1964 and it was opened in 1976. It is worth a visit inside to see its four huge windows. The cathedral is situated behind the Petrobras building and accommodates 20,000 people.

Other spectacular places of worship are the baroque Igreja Sao Francisco da Penance, which gives the Largo da Carioca, Nossa Senhora de Candelaria, built between 1775 and 1894 was the church with more wealth during the imperial era, and the Mosteiro of Sao Bento, a of the best examples of colonial architecture in the country. 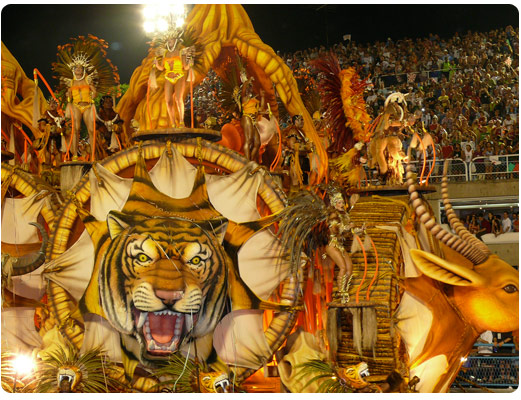 The famous and glamorous Rio carnival is a spectacle worth seeing, although in other areas of the country the carnival is celebrated in a more authentic way.In many ways, the time of carnival is the worst time to go to Rio: the taxi fares are quadruple, accommodation prices are tripled, and masses of visitors come to town to have a good time.The cheapest hotels are found in the areas like Gloria, Catete and Flamengo. To go out at night without spending a lot of money, we recommend the area of Botafogo. Cinelandia and Lapa is the gay heart of the city where there are many locals of samba. The best night clubs are located in Leblon and Ipanema.