Getting there & around Paraguay


Asuncion is a good center for air traffic in the Southern Cone. There are not many land border crossings: three from Argentina, two from Brazil and a more difficult from Bolivia. From Asuncion you can take a passenger boat that performs irregularly, a round trip journey on the river Paraguay, up to the Brazilian city of Corumba.

The National Transportation Airlines (LATN) and Air Transport of the Mercosur (TAM),

the passenger service of air forces, are offering affordable flights to destinations in northern Paraguay and some parts of the Chaco.

There are also frequent Bus Services to almost all destinations in the country.

Paraguay has got trains which are old, cheap and slow, except for the line that goes from 28 km Aregua Assumption in Lake Ypacarai.

Driving can be dangerous, especially at night, due to the transit of wooden bullock carts and cattle that are found on the most dangerous roads. There are also passenger boats that rise from the river Paraguay Asuncion to various ports. In the capital, there is an extensive system of buses and metered taxis. 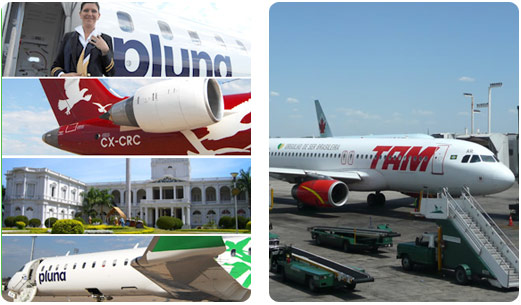