San Carlos de Bariloche, usually known as just Bariloche or The “queen” of the Andean Lakes District, is a beautiful city in the province of Rí­o Negro, Argentina.

Bariloche is located in the foothills of the Andes mountains and it is surrounded by the lakes Nahuel Huapi, Gutiérrez Lake, Moreno Lake and Mascardi Lake and mountains Tronador, Cerro Catedral and Cerro López.

Bariloche is also known as the “American Switzerland” because of the similarity with that country, besides this city and its surrounding mountains and lakes are unquestionable tourist attractions all year long for sight-seeing, trekking and climbing. 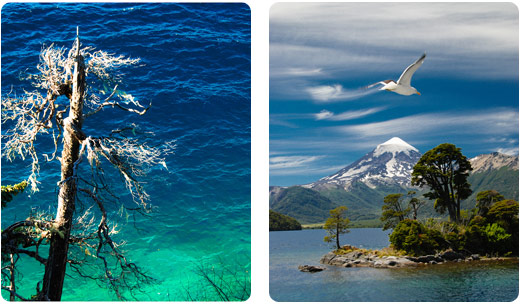 For many, Bariloche is synonymous of skiing in winter but there is even much more than winter activities.

For instance during the summer you can do trout and salmon fly-fishing in the blue lakes. You also can practice sports such as hiking, river rafting and walks around ancient forests, as well as climbing most of the peaks surrounding the city. These are some of the activities enjoyed by tourists in this Patagonian town.

Tours on rowing, mountain bike and horseback rides with the possibility of camping in the thick forests with natural lakes and rivers turn the city outskirts into an ideal setting to have great fun with the whole family.

During the winter with the first snowfalls begins the ski season and the practice of winter sports at mythical and famous Mount Cathedral which is considered one of the most important ski resorts in Argentina and South America.

Bariloche is the place where Argentine youths have spent their graduation trip for several decades because the city has everything all generations look for.

The nightlife of Bariloche with its famous discos and amazing pubs have led many tourists to wake up in front of the lake watching the sun climbing the mountain and throwing its light upon this nice and very friendly Andean city that they will visit once and again for sure.

Bariloche stands 1,640 kms away from Buenos Aires the capital city of Argentina and it offers excellent accommodation and gastronomical services.

Other distances in kilometers from San Carlos de Bariloche are the following ones:

The name of the city Bariloche comes from the Indian word Vuriloche which means “people from behind the mountain”. The Vuriloche pass was used by the Poyas Indians to cross the Andes and was kept in secret from the European priests for a lot of decades.

Regarding the excursions that can be taken in Bariloche, there is seduction and action all year long.

One of the best tours in Bariloche is the traditional lacustrine excursion entitled Victoria Island and Arrayanes Wood that will allow reaching Puerto Qretihué after a two hour boat ride where you can see a forest formation unique in the world with centenary specimen. You also can have an amazing view of Anchorena Bay as well as the whole zone of Llao Llao and Pañuelo Port  from the panoramic point located at Monte Bella Vista.

Another lacustrine excursion that can be taken from Bariloche is the boat trip entitled a visit to Port Blest, Lake Frí­as and Cascada de los Cántaros.

Do not miss out the Circuito Chico (Small Circuit). This a half day tour consisting of a 60 Kms. ride along the coast of majestic Lake Nahuel Huapi, with restaurants, tea houses and places to buy home made goods and chocolates. Also a visit to the famous Cathedral Mount is included during the tour.

During the summer months you can practice rafting taking the Bariloche fast water currents.

Then, due to the altitudes surrounding Bariloche, the city is considered as the paraglider’s dream. You can make your “debut” as a beginner, in a baptism flight over one of the most incredible landscapes and lakes in the world.

Finally is very advisable in Bariloche the horse rides because there are a lot of possibilities for this activity nearby Bariloche.

No doubt Bariloche is the most important spot to visit in Patagonia.