The first Argentina destination! The city of Buenos Aires is the capital of Argentina.
It is one of the world’s most exciting cities where you definitely should dedicate a good chunk of time to get to know this big metropolis and move away from the beaten track.

Buenos Aires is Latin America’s third largest city and home to over 13,000,000 Porteños (people from BA). The climate is nice all year round, although sometimes it can get steamily hot in summer and chilly at winter.

One of the best attractions of Buenos Aires is its architecture. Its style reflects the influence of the Spaniards, French and Italians in its building and in its parks and squares. The city has got mansions, wide avenues, extensive green spaces, hundreds of sculptures and a large quantity of churches; all integrated among houses, office buildings, apartment buildings and modern skyscrapers.

Buenos Aires is divided into barrios, which means neighborhoods. Each one of them has something special to offer and has an important story that identifies the spirit and characteristics of its citizens.

Below we described the best and most touristic barrios of Buenos Aires.

It is one of the oldest neighborhoods of Buenos Aires and it is very bohemian. This entire area is considered as a National Historic Monument because it has the cobblestone narrow streets, high trees, and a particular kind of public candle lights, called (faroles), still in use, which make an atmosphere of special reminiscence. Once of most important points is La Plaza Dorrego, where a kind of flea market takes place every Sunday.

This great neighborhood is divided into the sub-areas of Palermo Viejo, Palermo Chico, Palermo Soho and Palermo Holywood. Nowadays it is the favorite place for bohemians and intellectuals tied to arts and literature.

The biggest parks in Palermo features beautiful lakes, a rose garden (Rosedal), a Japanese garden, the Buenos Aires Zoo, the Galileo Galilei Planetarium, and even a Hippodrome. Besides, it became a gastronomic center with more than forty bars and restaurants, which are in the able hands of young and creative chefs. Palermo is an area also very known for being full of new designer clothes and decoration shops.  The main square in Palermo Viejo is called La Plaza Serrano where there are boutiques and restaurants during the day while trendy bars rule all the hours of the night. 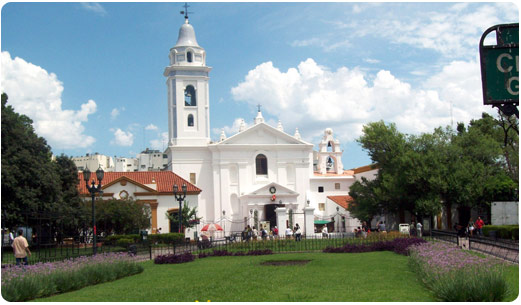 This neighborhood is established as the most cultured neighborhood in Buenos Aires, most of the city’s finest hotels are located on its broad avenues, near fashionable boutiques and restaurants.
La Recoleta as well is a real European and luxurious neighborhood that is packed with outdoor cafes, bars, and the following highlights:

Puerto Madero is the neighborhood of the new restaurants, shopping and entertainment in Buenos Aires. This area was first used for storage by the docks, but, ten years ago, was transformed into the modern hotspot that it is today.

The area attracts businessmen looking for a sunny lunch at noon and a fashionable, wealthy crowd at night. It is lined with elegant restaurants serving Argentine steaks and fresh seafood specialties, and there is a popular multi-screen cinema complex, the Argentine Catholic University campus and a private art museum. 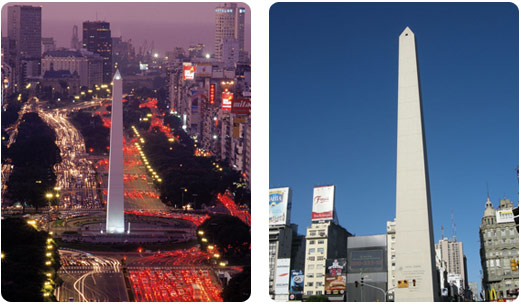 Buenos Aires downtown is also called the micro-center and it is quite busy during working hours with people coming in and out of the many government offices and shopping stores in the neighborhood. On nights and weekends many shops and restaurants shut and the area becomes significantly quieter.

Here you also will enjoy walking in Florida Street, the biggest and most important pedestrian street in town and visiting the Colon Theater which is considered one of the most important opera houses in the world, the Obelisk, which is symbol of Buenos Aires and a very famous monument. 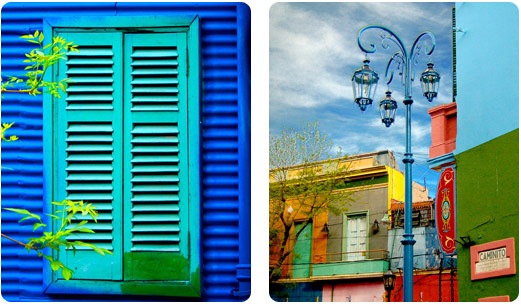 It is located in the south of Buenos Aires, right in the port. This neighborhood has always been the door and first home for all immigrants. It maintains its special profile and is mainly visited by tourists on Sundays when you may enjoy tango dancers and singers exhibitions. The most famous street in La Boca is called Caminito (little path), and is the center of tourist activity in the area.

Everyone knows someone who has been in Buenos Aires and raved about it. You have put it off long enough. Come to Buenos Aires and you will understand why so many people have fallen in love with this amazing city, and even decided to stay. There is a good chance you will be one of them.