Before the Spanish colonization, the art was reduced almost to the production of ceramics, stone, metal, and textiles. The Spanish introduced the concept of urbanism in cities with orthogonal plane.

Art of the Incas

They built mansions, churches and monasteries in which they imitated the prevailing styles in the metropolis, either the Renaissance or early Baroque. Gradually, these currents from Europe began to show native influences, which resulted in a style known as mestizo.

(Mix race) The best examples are found in the churches of Puno and Arequipa.

The painting also imitated the European style. As local artists gained confidence in themselves, came a new style characteristic of Cuzco in which artists deviate from their attention from the visible world to focus on fables and fairy tales.

It is remarkable that all this work exerted had influence on Paul Gauguin, who spent his childhood in Lima. 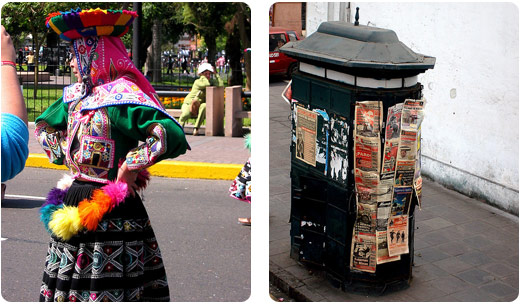 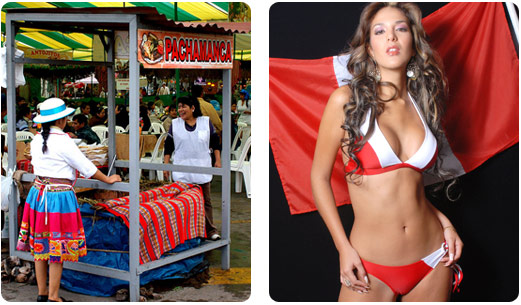 The Peruvian music has almost an exclusively folk style, but in their literature everything is accommodated, from the polemic which was inspired in the independence to the anarchic individualism of its many poets, through the dreams of youth of Mario Vargas Llosa, author of international fame.

The predominant religion is Roman Catholicism, although that faith is mixed with indigenous beliefs. The most important language is Spanish. However, in the highlands most natives are bilingual, with Quechua as their mother tongue. In the countryside there are others 70 languages which are spoken and in the most remote corners of the Amazon, few are fluent in Spanish.

The Peruvian dishes are tasty and they vary by region. Logically, the seafood is usually better on the coast, while the Inca delicacy, roasted guinea pig, is eaten in the highlands.

Other dishes include lomo saltado (fried tenderloin with onions), corvina ceviche (marinated sea bass with lemon, chili and onions and accompanied by boiled potatoes or sweet potatoes), and Creole soup (a spicy broth with pasta, beef, eggs, milk and vegetables).