Cartagena and the Caribbean coast

Cartagena de Indias is legendary for its history and beauty. It has been immortalized on countless canvases, glorified in hundreds of books, and every single detail has been photographed countless times. Being the greatest city in Colombia deserves all these honors.

The walled old town of the Spanish colonial port is a real gem. It is full of churches, monasteries, squares, palaces and noble mansions with balconies and shady courtyards. You enjoy just walking through the old city, but their most outstanding monuments are the Palace of the Inquisition, the colonial mansion Casa del Marques de Valdehoyos and the beautiful old port of Cartagena in the Bay of Souls.

Outside the walls, Gethsemane, a less touristy city also has beautiful places, but is less well preserved. Nearby there are several impressive Spaniard forts, including the Castillo de San Felipe de Barajas from the seventeenth century that it is certainly the greatest and strongest fortress built by the Spanish in their colonies.

Las Islas del Rosario, 30 km southwest of Cartagena, has magnificent coral reefs and abundant marine life, which makes the islands are a popular place for scuba diving and snorkeling. The peninsula located in the south of the Old City houses the upscale resorts like Bocagrande and El Laguito. Most travelers on a tighter budget can stay in Gethsemane because in that old town can find accommodation at moderate prices.

Other highlights of Colombia’s Caribbean coast are: Mompos City, noted for its architecture, the beaches of Tayrona National Park, the Sierra Nevada de Santa Marta, the highest coastal range in the world, the Arboletes mud volcanoes and in the depths of the jungle, the ancient city of the Tairona Indians, La Ciudad Perdida, the greatest archaeological discovery made in America in the twentieth century. 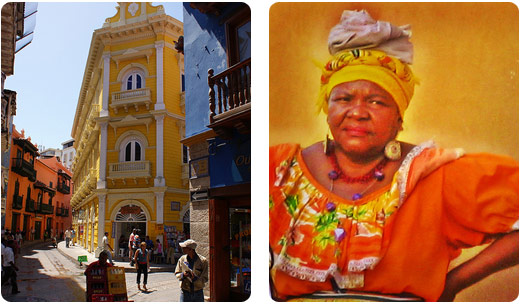