Uruguay may be a small country, but its artistic and literary tradition is impressive. Artists such as Pedro Figari, a painter of bucolic scenes, and Jose Enrique Rodo, considered the best writer in the nation, have earned international recognition.

The theater is very popular and playwrights such as Mauricio Rosencof (Tupamaro movement’s founder and tortured by the military government in the 1970s), have an important role in cultural life.

In regard to music and dance, the bulk of the traditions (folk songs, polkas, waltzes ,…) comes from Europe but was developed with local conditions.

Football has a large number of followers across the nation.

The vast majority of Uruguayans who profess a religion are Roman Catholics, but the church and the state are institutions which are officially separated. 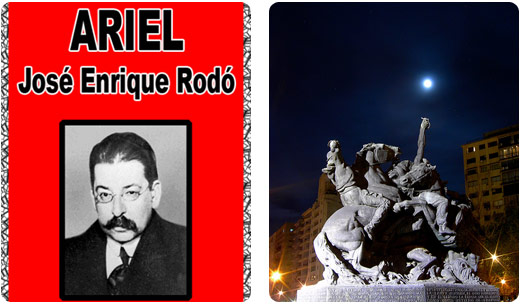 Famous writer and Hero of Independence of Uruguay

Other faiths also have made small inroads into the country, in Montevideo there is a small Jewish community, several evangelical Protestant groups and some members of the Unification Church of Sun Myung Moon.

The Uruguayans are great lovers of roasted meat and the barbecue is the national dish. Another standard of cooking is the “Chivito”, a hearty steak sandwich with garnish.