Cuzco is the archaeological capital of America and the continent’s oldest city inhabited without interruption until today. It has become a vital link in the South American tourist network. His legacy at the heart of the Inca Empire is distinguished by sight: most streets have stone walls built by the Incas and through those streets it is possible to see Inca natives walking around and talking in Quechua.

There are magnificent examples of colonial art like the cathedral (begun in 1559) and the church of La Merced.

It is important to see the Coricancha ruins, which are located at the east of downtown, originally they were covered with gold, but today only they have carved stone walls. Noteworthy is the Archaeological Museum, which houses pieces of metal and gold, jewelry, ceramics, textiles and mummies. Nearby we can find the ruins of Sacsayhuaman, Qenko, Puca Pucara and Tambo Machay.

West of Cuzco is situated Machu Picchu, the most spectacular archaeological site on the continent. Despite the mass tourism (especially during the dry season from June to September), the lost Inca city retains its air of grandeur and mystery. 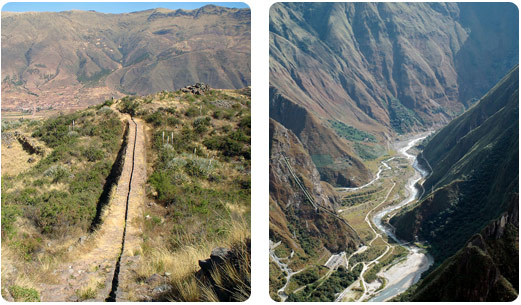